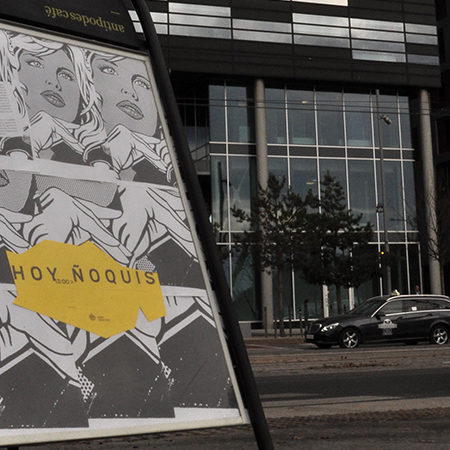 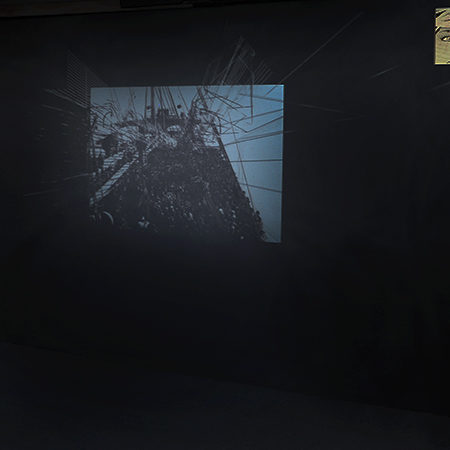 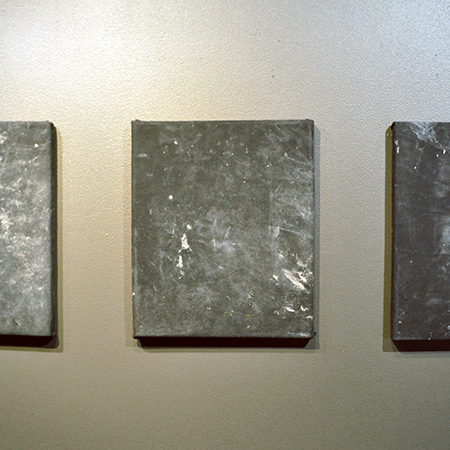 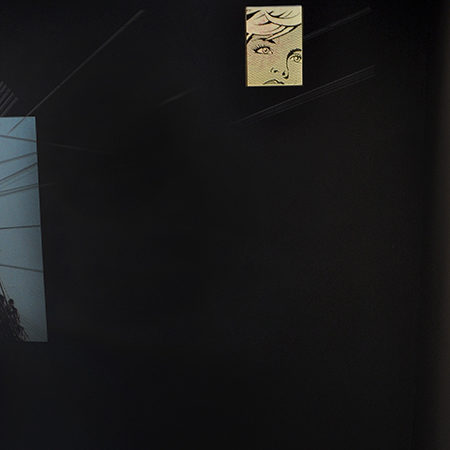 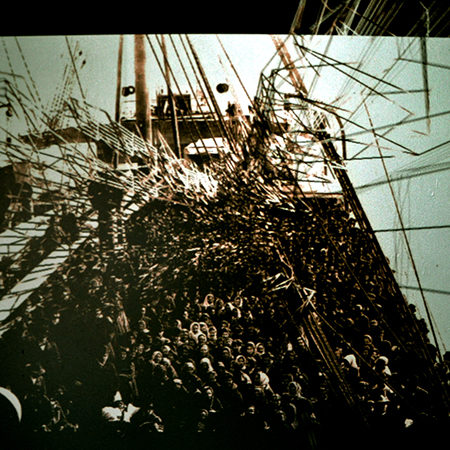 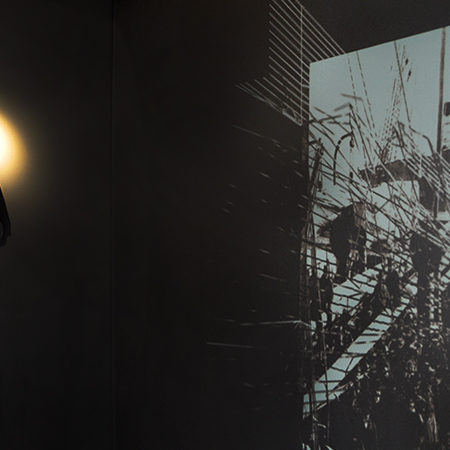 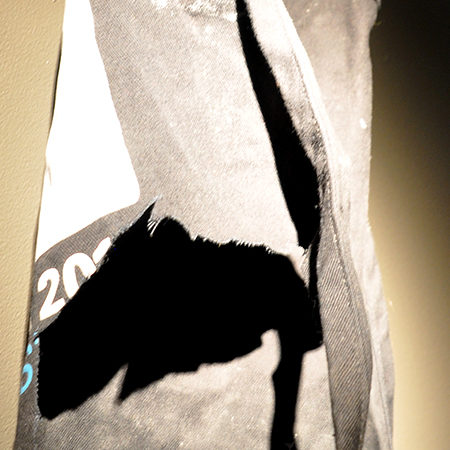 The exhibition developed the last day of “HOY ÑOQUIS” at antipodes café DEG15 was based on an installation including a projection of a still image placed between the rest of an apron and three frames -made with that apron-. In addition, and outside the place was a poster.

As it was a 29th. gnocchi where prepared and shared with all visitors.

Steady image of a boat full of Italian emigrants going to South America, intervened with lines sensitive to the sound of the ambience.

The apron was a present we got in early June 2014, from the Organisation of San Sebastian as the European Capital of Culture in 2016. This merchandising gift was in black fabric and included logo of the event silk-screen printed with two inks in its front side.

It was always used with the reverse to the front, just for making gnocchi until October 29th, 2016, and never laundered.

We replaced the white fabric of 3 ready for paint ca. A4 canvases with the black fabric from this mentioned apron as a memory of the 3 years making the gatherings “HOY ÑOQUIS”

Collage using 9 of 10 unique photocopies made in 2007 in Uruguay and a yellow paper printed with the text “HOY ÑOQUIS” cut in an irregular shape. Photocopies are 9 A4 enlargements of 1 enlargement photocopy of an illustration printed in the cover of the now defunct magazine “Deustchland” supported by the German Federal Foreign Office. The illustration -which reminds the girl from “M-Maybe” by Lichtenstein- is a halftone printed face of a caucasian woman with long hair -most likely blonde-, light colour eyes and one hand with a white glove in a position that suggest thinking.

One of the papers includes a photocopy of a Uruguayan coin, and another paper includes the paragraphs 49 and 50 -in Spanish- of The society of the spectacle by Guy Debord:

50.
With the achievement of economic abundance, the concentrated result of social labor becomes visible, subjecting all reality to the appearances that are now that labor’s primary product. Capital is no longer the invisible center governing the production process; as it accumulates, it spreads to the ends of the earth in the form of tangible objects. The entire expanse of society is its portrait.”
G.E.D. [translated by Ken Knabb (source)]

Poster, apron and frames where exhibited in the show “antipodes café visits Elefante” in Brasilia, 2017.

In Uruguay and Argentina, there is a tradition of eating handmade gnocchi the 29th of each month, both in houses and in restaurants. In these last ones, as well as in pasta stores, those days they usually put a sign in the street with the text "HOY ÑOQUIS" (Eng. Today: gnocchi).
Also as part of the tradition, in some places they put a coin (or even notes) under the dish, wishing for money.

This story -that has many versions as all good ones- perhaps should be started highlighting the travel of potatoes from South America to the rest of the world, starting with Europe after their invasion. Later on, poor farmers of northern Italy discovered that they can replace expensive wheat to create a new kind of pasta based on cheap and accessible potatoes, basically dumplings, called gnocchi (Eng. buns/lumps/little balls). This tuber crops has a strong relation with economical vicissitudes, saving from starving diverse populations around the world. Nordic countries knows quite well potatoes for that reason.

In late XIX and beginning of XX centuries, both Argentina and Uruguay where under exponential growth in all senses. But in these times, Europeans weren't in best situation, and particularly Italians flew in millions to those places escaping from economical crisis and wars. Those nations where young and defining their identity on daily basis, and this massive immigration radically affected that construction "through a policy of very strong cultural syncretism." In fact, "there are many Italian traditions that Argentinians [and Uruguayans] keep which are almost not existent in Italy." * One of them is to eat gnocchi on the 29th of each month. A simple dish for wishing for prosperity.

Felipe, born in Uruguay has in his family tree those Italians roots that allowed him to have Italian nationality. And thanks for those papers, he could move to Nordic countries without too many complications as if he arrived just as the South American he is.

Since he moved to Norway, impressed by

Felipe started cooking gnocchi sporadically the 29th -and last years on each one- in gathering with the aim of talking about traditions. Who makes them? why? and so on…

Venues and amount of visitors are different from meeting to meeting, but gnocchi are always served gratuitously. During 2016 "HOY ÑOQUIS" gatherings were supported by Oslo Kommune, Bydel Gamle Oslo. (Frivillighetsmidler 2016)