Share "Exhibition: “The illegal measurement and the alegal dimension” by Recetas Urbanas" 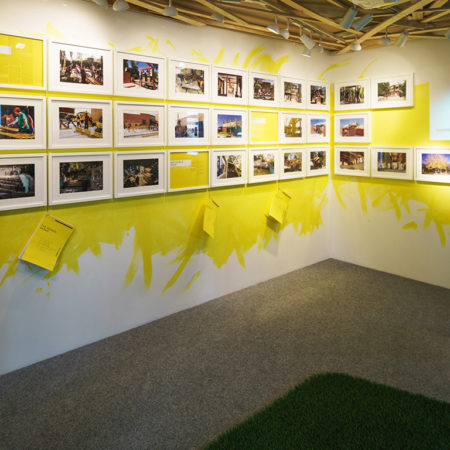 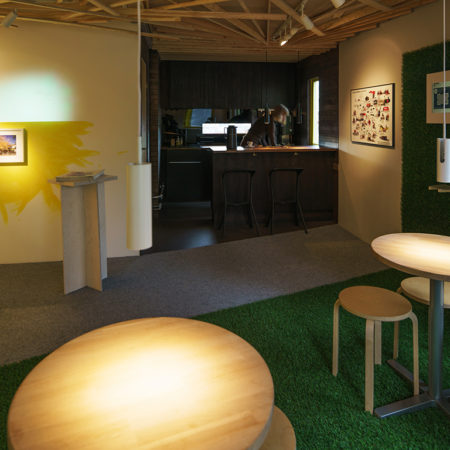 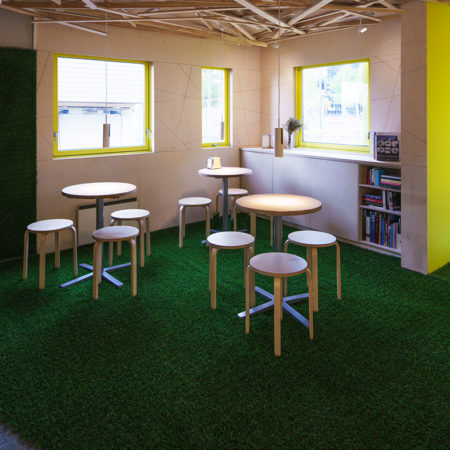 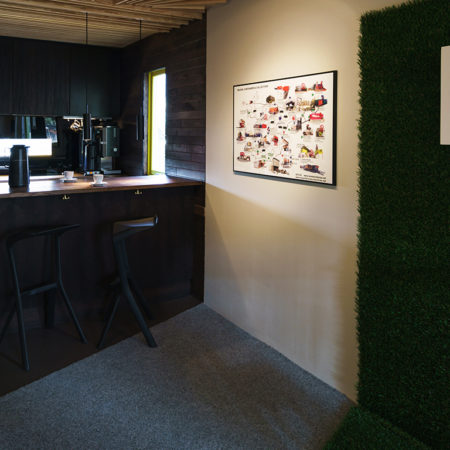 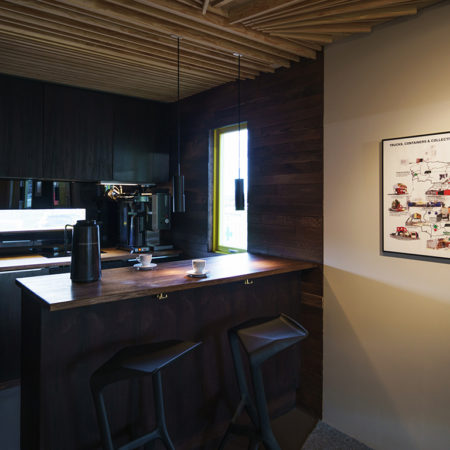 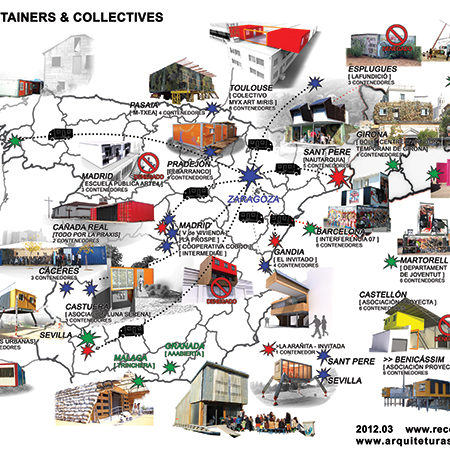 For the last main show related to references of antipodes café DEG15, and knowing that the same year a series of bombastic activities where happening in Oslo regarding architecture around the idea of “after belonging” driven by a stubborn stagnant approach –later confirmed in mainstream press-, we added a little bit of salt and pepper by presenting the work of Santi Cirugeda.

From the pavement, a passageway in artificial grass invited people to enter to the space. Inside, the grass continued until a wall where it was placed an interactive screen with diverse information about “Collective Architectures”. In its left side and closer to the bar, a framed infographics about diverse projects made by reusing containers around Spain and in their case, opening his own studio in public spaces. A clear friendly wink to antipodes café. The grass took also all the space of coffee tables and bookshelf with a selection of Santi’s publications and references.

In the other side it was a video with superposition of images and videos of processes of several of his past works from last 20 years over a stamped chart making so simple as clear the modality of work by Recetas Urbanas; after that a massive group of aligned frames with resumé in text, images of 3 of their current projects regarding construction of extensions of public facilities such as a kindergarten, school and college, all projects made together with the users of the spaces, hanging there core legal documents of each project showing with transparency the cope of their work. The installation also included an infographic video highlighting architectural details of the process of the extension of the School of design in Madrid, and a free publication printed as a newspaper with more information about that project. Edition also presented at the 15th International Architecture Exhibition in Venice of 2016. A little prank for those who look for cockades more than exhibitions.

The exhibition counted with a homemade catalogue printed on demand and the presence of Santi and his partner Alice Attout, also member of Recetas Urbanas, both in the open montage of the show and in a gathering called “Kaffe med… Alice & Santi” that ended with them preparing Lentils with Spanish chorizo in the finissage of the previous exhibition and our celebration of the 20 anniversary of Santi’s intense career. Days of enlivening talks at full sail. We’ll always have Seville!

THE ILLEGAL MEASUREMENT AND THE ALEGAL DIMENSION

“The legal nature of some projects relies on loopholes, that is, the absence of a specific regulation or an exact definition within a legal framework. These actions can stimulate a legal change for a further improvement of the juridical framework, or just stay as a transitory step.
We have also assumed extra-legality or non-illegality when we have neither instigated nor required the supervision of the administration for a project’s execution.
The concept of ‘alegality’ applies to occupation strategies carried out by means of neither regulated nor prohibited methods of becoming owner of “things which are ownerless”. Unlike legal occupations (adhered to methods in accordance to the law) or illegal occupations (against the law), alegal occupations take advantage of loopholes—areas where the regulation is blurry or does not exist. The texts of legal regulations often oversimplify or limit rights because of their inability to enclose the great variety of real life. Alegality does not mean ‘against the law’; it rather goes a step further, displaying possibilities not considered before. This way of acting can finally achieve a change in the legal framework, and so what was initially illegal becomes legal. This process may be called “induced legality” and clearly illustrates the last intention of these transgressions: to get to modify the law.
The most important point of the experience, however, is neither the project itself nor its further actual usage, but the fact that people get organised and learns to think and work by themselves.
The creation of the network “Collective Architectures” in 2007 assumed likewise an alegal structure. The network gathers more than 100 collectives which collaborate together and exchange architectural and management models, out of the juridical framework for professional associations.
The making of self-construction with all kinds of people over the last 20 years has been characterized by extra-legality as a result of the lack of adequate laws and rules in the so-called first world, and has also generated a true methodology based on good practices which could get consolidated in a new juridical framework.“ 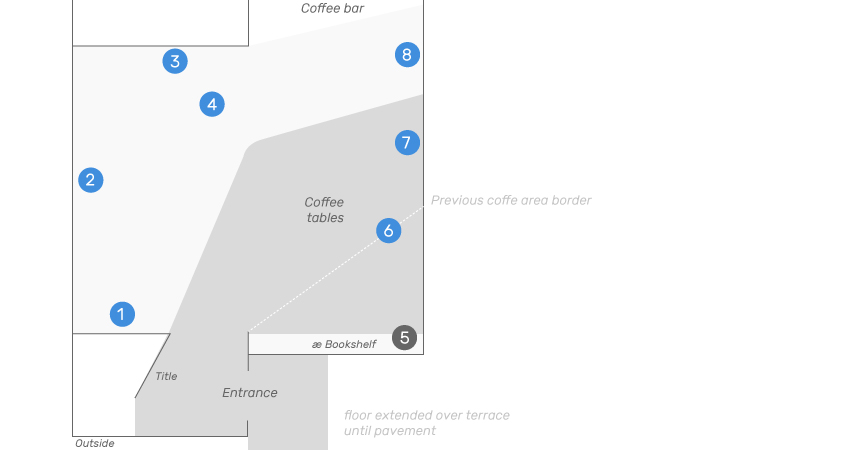 Santiago Cirugeda, Santi, develops subversive projects with distinct ambitions in urban realities, from the systematic occupation of public spaces in containers to the construction of prostheses in facades, patios, roofs and lots. Santi negotiates legal and illegal zones as a reminder of the pervasive control to which we are all subject. He is now working together with local governments to implement new housing models for the socially disadvantaged. After 7 years of solo work to address issues like ephemeral architecture, recycling, reuse of materials, strategies of occupation and urban intervention, the incorporation of prosthesis constructed buildings or participation citizens in the decision-making process, he set up in 2003 the architecture office Recetas Urbanas (Urban Recipes). In 2007, he presented the book Urban Situations, which shows legal strategies and social demands through architectural projects. In 2008 he presented the documentary Dr€am Spanish, along with Guillermo Cruz, which reveals the causes and effects of the housing bubble in Spain. In 2011, Collective Architectures BOOK portrayed mobilize the initiative consisting of dozens of groups to recycle containers from a temporary settlement dismantled, turning them into a multitude of self-constructed and self-managed spaces distributed throughout the Spanish territory resulting the network eponymous. He has also participated in solo and group exhibitions worldwide, written many articles, and taken part in educational and cultural events including workshops, lectures, seminars, and conferences. Projects creating temporary sites for community discussion and artistic intervention include HoW – House of Words, a temporal add-on structure for the Gothenburg International Biennale for Contemporary Arts (2015), La Carpa – Espacio Artístico (2011), Nau de les Art/Proyectalab, Benicasim (2010), The Nest, Bòlit Centre d’Art Contemporani, Girona (2008), Institutional Prosthesis, Espai d’art of Castelló (2005), and Kuvas SC (1997).
He was awarded by several prizes: Ojo Crítico, Iniciarte, Naider “Sociedad, Ciudad y Territorio” (2008) and the RIBA International Fellowship, the FAD medal, the Global Award for Sustanaible Architecture (2015), the Ones Mediterrània (2016) and the Curry Stone Design Prize (2017).