The second of four concert for machines arranged by antipodes café during 2016, was performed by Dani Umpi in a parade starting from Sukkerbiten towards antipodes café DEG15. During the concert, Dani presented new songs from the upcoming album Lechiguana.

“In the beginning there was performance, and then everything else. This principle not only applies to 20th century avant-garde performers, but also to promiscuous, pagan symbolists like Dani Umpi.

In a rare synthesis, Dani Umpi engenders characters with an approach analogous to Cindy Sherman, explores the conceptual-sensorial participation of the audience in the vein of Lygia Clark, while scrutinizing the mainstream, folk, and avant-garde world in a manner akin to Helio Oiticica.

Dani’s world is a Tropical Neo-Concrete repertoire amalgamated by a glitzy conceptualist. Dani is not only a popular iconographer, but also aspires to become a “mainstream experimentalist”, an oxymoronic, genetic crossover between Yoko Ono, and Cris Morena.

Dani’s work encompasses collage, cabaret, music, literature, and visual art which modulate between the culture industry, and popular culture. The manufacture of a popstar persona has enable Umpi to compose songs, while melodramatic procedures sets a framework under which he writes novels akin to the works of Manuel Puig, and Hebe Uhart.

Dani’s poetic sensibilities have enable him to style paintings, and installations out of paper which become interwoven on stage through a kaleidoscopic turmoil to form his onstage costumes, and stage design. His books, which serve as the basis of his songs, deal with subject matters such as love, friendship, and the ridicule.

Dani Umpi transmutes the cut and sew of his costumes from the inane discourse present in glossy magazines further devoiding them of both shape, and meaning. The easiest way to categorize Dani’s universe is within the realm of pop, even though; he is without a doubt a romantic revivalist of glam-trash, pastiche, and carioca. Truly a Duchamp of artistic self-help.”

Syd Krochmalny, Buenos Aires, Argentina, 2016
[Artist and writer. He is involved in the Center for Artistic Investigation and was awarded a postdoctoral fellowship by the Argentinian Research Council CONICET at the Institute of the Theory and History of Art Julio Payró in the Faculty of Philosophy and Arts at the University of Buenos Aires.] 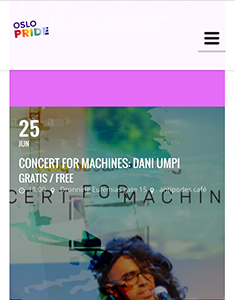 Series of performances at antipodes café DEG15 where sounds wriggle out of fences. Activities scarcely communicated, unexpected gifts to the city under construction, explorations in a place rotting in oblivion.