With the aim of sharing our living references from diverse topics and latitudes –as well as to share time with them and keep learning–, antipodes café invited this time the world renown graphic designer David Carson for a short but active visit to Oslo. This trip was kind of coordinated with “Creative Mornings Oslo” who invite both David and Felipe to talk at Grafill (Norwegian organisation for visual communication) about freedom and creativity. In addition to participating in this event, antipodes café arranged two key conferences in specific places, one of them in Kulturhuset i Oslo and the other in Westerdals School.

Soon before his visit he was distinguished as one of the 30 most influential designers in Apple computers 30 year history. Also in 2014 he was named as an “AIGA Gold Medalist” and The Smithsonian Institute highlight him as “one of Americas most important artists”. All this cockades helped to find support and then impulse to see him again, knowing –& quite well– that he is not a guide in mellowness… but it worst the try if you have interest in visual communication, moreover in days where graphic design(ers) drowns in a timorous as sterile current. And It can’t be for lack of references. Surfers welcome! 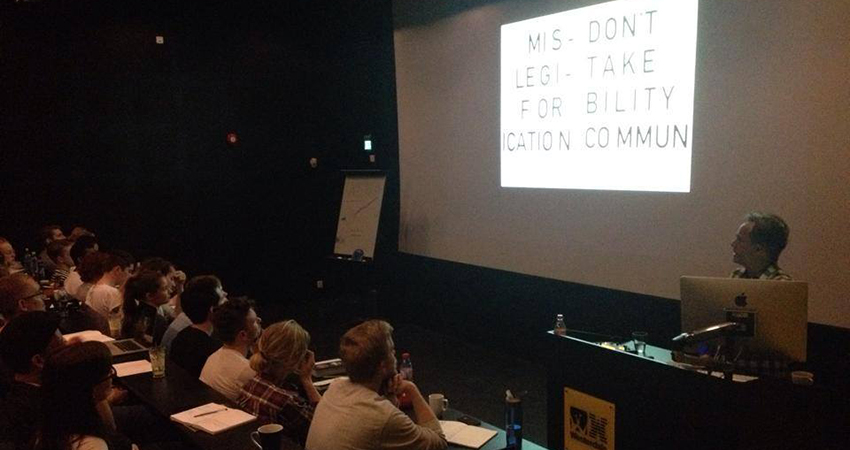 “Recognized for breaking the rules, nearly untethering legibility from communication and inspiring a generation of young designers with his bold understanding of cultural style.

Typography spun into a whirling end-of-century gyre in the 1990s, and David Carson was at its center. The incendiary pages of Ray Gun magazine inflamed the eyes and minds of countless young designers who sought to tap into the freedoms unlocked by his bold new style. Carson shaped everything in his path for his own purposes, endlessly contorting type, layout and grid into new configurations and abandoning design’s established truths of order and legibility. He represented a new breed of visual author.

In 1980, Carson was a 26-year-old high school teacher in southern Oregon. He received a flyer in the mail—intended for high school seniors—for a summer program in graphic design at the University of Arizona in Tucson and decided to attend. The workshop was run by Jackson Boelts, who became a mentor and lifelong friend. A few years later Carson enrolled in a summer workshop in Rapperswil, Switzerland, where instructor Hans-Rudolf Lutz challenged him to work experimentally and to find reasons for shaping form in particular ways.

By the early 1990s, digital tools were colliding with Modernism’s exploded vocabulary. Designers could now make and manipulate form through direct action in real time. QuarkXPress and PageMaker were Carson’s primary medium of visual authorship, compelling him to work faster and to try more things in a shorter time. The new tools enabled the iterations and accidents that are crucial to experimental work, but they were not magic pills for instant talent. Carson explains, “It’s the basic decisions—images, cropping and appropriate font and design choices—that make design work, not having the ability to overlap or play with opacity.”

In 1995, Carson published a monograph called The End of Print. The title came from a comment made by British designer Neville Brody during a joint interview in London. Brody had said that Ray Gun represented “the end of print”; everything with type and design had been tried, so it was time to move on to a different medium. Print was spent. At the time, Carson didn’t fully agree with Brody’s comment, feeling that another magazine would soon ignite the collective passions of designers and readers. Looking back in 2014, Carson feels that those seething conversations about form and function in the 1990s never did rekindle, especially not in the medium of magazines. He explains, “Graphic design seems a bit stagnant now, and a lot of people and ideas have gone to other areas of expression.”

Although Carson has produced everything from books and ad campaigns to videos, magazines were the crucible of his style. The big, cheap pages and open-ended seriality of the magazine offered an ideal arena for experimentation over time. His first gig as an art director was for Transworld Skateboarding (1984–1987), followed by Transworld Snowboarding and the surfing magazine, Beach Culture. When publisher Marvin Scott Jarrett launched Ray Gun in 1992, he invited Carson to be the founding art director—the magazine became more famous as a platform for Carson’s visual voice than for its music content.

From 1995 to 2003, Carson ran his own studio in New York City, working with diverse clients in the worlds of fashion, entertainment and beyond, including Nike, Toyota, Quiksilver and MTV. Since then, he has served in a variety of positions, including creative director for the Bose Corporation. His legendary disregard for readerly conventions has made him a hero to some and an agent of ugliness to others.

Carson forged graphic design into a cultural force and a medium with its own shape and direction. Although design swims in the stream of commerce, it lives there, in Carson’s work, as its own strange animal.“* (AIGA, 2014)